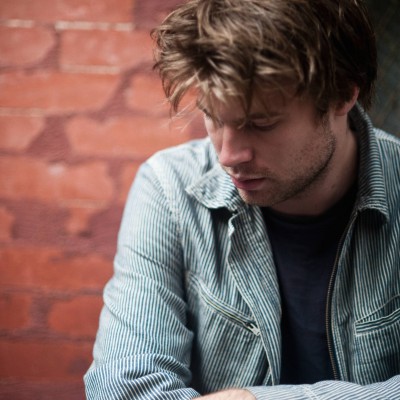 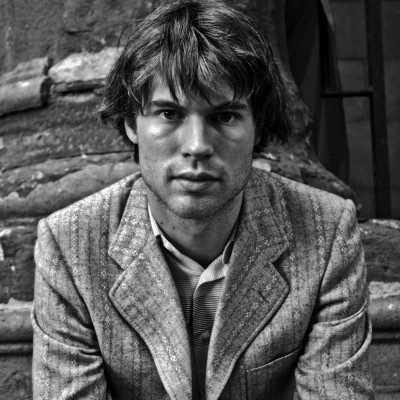 First of all there is his voice. First you will hear it -- maybe hate it -- but then, eventually, it will begin to transform how you think voices are supposed to sound. A frog in the throat, a kink in the heart, a rasp that doesn't go away...

Then, hopefully, you will be overhwhelmed by the music -- an ebbing then swelling, oceanic thing, it comes than goes; tickles your ears then pokes you in the ribs; has unstoppable momentum when it is not finding new ways to climax or standing absolutely stock still.

Doveman is Thomas Bartlett and a select group of collaborators. Most often, the band includes banjo player Sam Amidon, a folk singer and old childhood friend; drummer Dougie Bowne, sideman to Iggy Pop, the Lounge Lizards, and Cassandra Wilson; guitarist and conjurer Shahzad Ismaily, who has previously appeared with that magical trifecta -- Marc Ribot, the Master Musicians of Joujouka, and Rage Against the Machine; and trumpeter Peter Ecklund, an expert in genres like swing and dixieland jazz. At various times there are various others. Doveman does not rehearse, but they sure can play.

When listening to this music you should keep in mind artists such as Frederic Chopin, Cat Power, Keith Jarrett, Talk Talk, and Chris Whitley -- unless you don't know any them or are not a fan, in which case you should keep in mind Nick Drake, The National, Mogwai, Explosions in the Sky, and other, trendier bands whose music has recently appeared in car commercials.

Together Doveman -- the Dovemen? -- make lovely, interesting, heart-rending sounds, like a broken wing flapping and starting to take flight.

And what about Thomas Bartlett? Who is this little bird?

Bartlett grew up in Vermont, and began playing ukelele at age three, after the wardens at his daycare found him strumming a block and decided he could probably put resonant strings to good use. He began playing piano at age five, and never stopped -- dropping out of high school to study in London with Maria Curcio, one of the 20th century's greatest classical music teachers, responsible for shaping Radu Lupu, Mitsoku Uchida, Pierre-Laurent Aimard, and many other top notch pianists who pop and indie rock fans haven't heard about, and probably never will.

Thomas went on to Columbia University for a year but dropped out, again -- this time to concentrate on his classical music studies, until he dropped out, again! -- this time to play with bands. He quickly become one of the most in-demand sidemen in New York City, insofar as New York City equals "the world." In the last year, Thomas has played or recorded with Antony & the Johnsons, Laurie Anderson, David Byrne, The Frames, Bebel Gilberto, Arto Lindsay, The National, and Yoko Ono. And that's just the famous ones. Not bad for a 25-year old serial dropout.

He's still young so there's not much else. Thomas has lived in Harlem since the year 2000, and enjoys cocktails, his large collection of top shelf liquor, home cooking, and complaints about his singing voice.