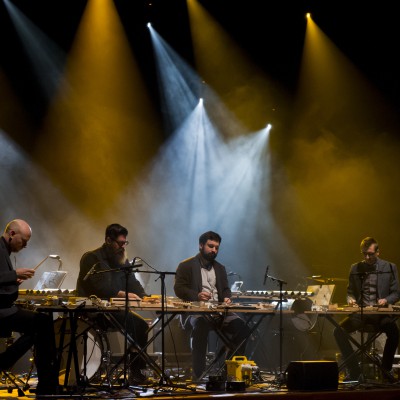 With its innovative multi-genre original productions, sensational interpretations of modern classics, and an "exhilarating blend of precision and anarchy, rigor and bedlam," (The New Yorker), Sō Percussion has redefined the scope of the modern percussion ensemble.

Their repertoire ranges from classics of the 20th century, by John Cage, Steve Reich, and Iannis Xenakis, et al, to commissioning and advocating works by contemporary composers such as David Lang, Steve Mackey, and Paul Lansky, to distinctively modern collaborations with artists who work outside the classical concert hall, including vocalist Shara Worden, electronic duo Matmos, the groundbreaking Dan Deacon, legendary drummer Bobby Previte, jam band kings Medeski, Martin, and Wood, Wilco's Glenn Kotche, choreographer Shen Wei, and composer and leader of The National, Bryce Dessner, among many others.

Sō Percussion also composes and performs their own works, ranging from standard concert pieces to immersive multi-genre programs -- including Imaginary City, Where (we) Live, and the newest endeavor, A Gun Show. In these concert-length programs, Sō Percussion employs a distinctively 21st century synthesis of original music, artistic collaboration, theatrical production values and visual art, into a powerful exploration of their own unique and personal creative experience.

In 2014/15, Sō Percussion performed David Lang?s percussion concerto "man made" with Gustavo Dudamel for the opening of the LA Phil season; performed Bryce Dessner's "Music for Wood and Strings" at the Barbican in London, and at Bonnaroo Music and Art Festival; released a collaborative album with Bobby Previte and the Dessner work in a Billboard-charting disc; created and performed an original score for a live performance and broadcast of WNYC's Radiolab with Jud Abumrad and Robert Krulwich at BAM; performed at SFJazz, the Museum of Fine Arts, Boston, the Mona Bismarck Center in Paris; and more.

In the 15/16 season, Sō returns to Carnegie Hall for a performance with Glenn Kotche and Shara Worden; opens Da Camera of Houston's season in collaboration with Dawn Upshaw and Gil Kalish; tours internationally to Poland and Ireland; performs at the SONiC Festival with the JACK Quartet and Tristan Perich; appears at the universities of Washington, Denver, and Wisconsin-Madison and, as Ensemble-in-Residence, offers multiple concerts at Princeton University.

Sō Percussion is the Edward T. Cone Ensemble-in-Residence at Princeton University, and its members are Co-Directors of the percussion department at the Bard College-Conservatory of Music. They run the annual Sō Percussion Summer Institute (SoSI), providing college-age composers and percussionists an immersive exposure to collaboration and project development.

Rooted in the belief that music is an essential facet of human life, a social bond, and an effective tool in creating agency and citizenship, Sō Percussion enthusiastically pursues a growing range of social and community outreach. Examples include their Brooklyn Bound presentations of younger ensembles; commitments to purchasing offsets to compensate for carbon-heavy activities such as touring travel; and at SoSI 2105, leading their students in packing 25,400 meals for the Crisis Center of Mercer County through the organization EndHungerNE.