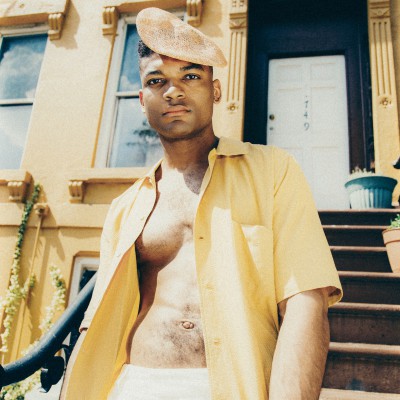 "Here comes a stunning new Brooklyn artist I had never heard of before this week and I can't wait to share with you...I hope he's going to make an awful lot more music." - BBC 6 Music

"Fusilier could change R&B, soul & funk in the same way The Weekend did at the start of the decade." — TheRevue.ca

THE ARTIST
"You're black and gay. How does it feel to have two things wrong with you?" That question hit hard when it was directed at Blake Fusilier two years ago, after a show by his former rock band.

Fusilier grew up in Atlanta during the heights of hot local labels like LaFace and SoSoDef. As a teenager, he picked up the violin with hopes of playing as well as Itzhak Pearlman while guarding his love of Georgia natives Goodie Mob. An interest in having a way with words would lead him to quietly brood over Edgar Allen Poe while a vocal community pride in neighborhoods like Decatur, or Stone Mountain, became the backdrop for his day-to-day life.

Says Fusilier: "One day someone asked if I could freestyle. As I nervously tried to explain to the 13-year-old that I like to take my time with my words, I was cut off-- 'Oh, so you're retarded?' That's when I started writing music."

Eventually, he put down the violin and moved to Boston for college where he became part of a loud, moody rock band called RIBS. In various basements and eventually on bigger stages, opening for the Joy Formidable and Queens of the Stone Age, they became one of the most popular bands in the local scene.

But at the moment of that band's greatest success someone asked him that question about being black and gay. Realizing how tiring it was to run away from the world's biased perceptions, Fusilier began making a body of the music that would make that question irrelevant and drain it of its power.

Some final thoughts from Fusilier: "I have this theory that if people knew who we really were in their minds, we probably would all have a lot more respect for one another. This applies to everyone: friends and acquaintances and bandmates. I think it's our duty to ourselves to make sure that those around us have a chance to allow others to see our glorious, true selves. I finally feel like I'm beginning to live by those words. The songs I'm wrapping up have been floating around for years. I had been anticipating the moment when people could actually hear even 20 seconds of my potential."


THE CRITICS
”One of the most creative songs to come out this year.” — The Revue.ca

“Fusilier’s voice is smooth and sultry, accentuated appropriately by a sexy-ass driving bassline. Pounding drums, an agile electric guitar riff, and catchy blips come in to balance the low-end heavy sounds and lift the track’s pulsing energy.... The sexual tension on the track and video is brazenly palpable, just as Fusilier intended” — Stereogum

”Fusilier's Avant-Funk Is Ready to March Into Your Summer Playlists: Some artists aim to make music that make you think, whereas others seek to make you feel, or move. Recent Brassland signee Fusilier somehow manages to play music that does it all. His electronic-funk sound enters through the ears and spreads to the rest of the body like a virus - a virus that only dancing with abandon can cure." — The Deli Magazine

“Experimental industria-rock gents RIBS remain one of the best Boston Bands to emerge from scene circles over the past decade. …a former member [Fusilier] has branched out on his own with an entirely new sound." — Vanyaland