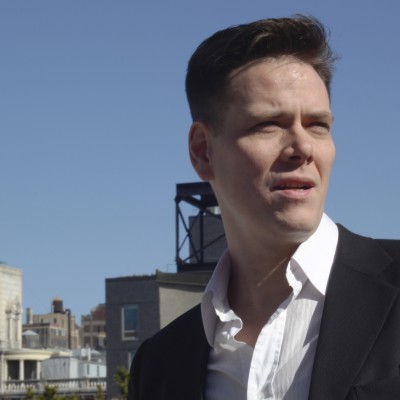 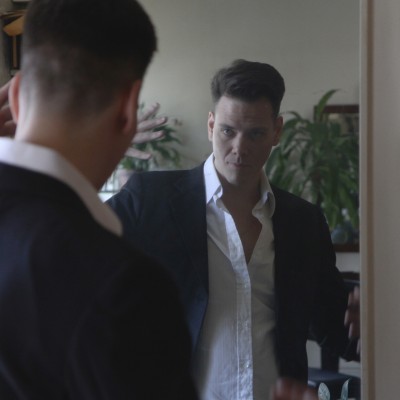 
Romantic electronic pop artist Baby Dayliner (aka Ethan Marunas aka Babbs) was born and raised in New York City, and went to LaGuardia High School of Music and Art, and the Performing Arts, also known as the "FAME" high school. His undergraduate study was done at St. John's College in Annapolis, MD. After varying roles in various bands, Marunas decided to take the stage as a solo act. He became deft at synths, samplers, and recording, and began crafting songs that would come to life as the Baby Dayliner stage show.

His first big sonic influence was classical music that his parents and private teachers fed him as a child violinist (age 7-17). Strangely enough, his first pop music love was Hall and Oates, which he listened to alongside Kabuki theater music and other diverse sounds. Later came jazz and hip-hop records. As he explained to So Much Silence in an early interview, "I grew up listening to hip-hop, and I'm always aware of it. Even top 40 crap. Hip-hop is a big part of my dictionary but I'm not a real thorough fan of it. Certain albums stick out. Nas' first album. Common's Resurrection. The first couple De La albums. The first couple Tribe albums. Jay-Z's whole library, for the most part. I listen to Aesop Rock and Blockhead, who are friends from way back. The new Ghostface album is solid. Gnarls Barkley sounds cool. Dr. Octagon. Big Daddy Kane. Jungle Bros."

Baby Dayliner was discovered by Brassland in 2001, the dawn of NYC's indie rock hype-cycle as documented in the 2017 oral history Meet Me in the Bathroom by Lizzy Goodman. While Brooklyn was teeming with a cool factor that preceded the blog rock trend, Babbs emerged as a pioneer of the 00s NYC scene. While Brassland flagship band, The National, were still struggling to catch a break, Baby Dayliner was packing downtown clubs — inspiring the band, as well as the label.

In the early to mid-00s, rabid fans would fill his shows singing along to every hyper-literate lyric, while mimicking his stage moves. Embodying the effortless cool of Frank Sinatra and the romanticism of Morrissey, The National's Matt Berninger says that it was, in part, Baby Dayliner's fearlessness on stage that gave him license to become a front person in the first place. Baby Dayliner went on to open for The National during their 2006 North American tour, their first burst of their popularity. After signing to Brassland — the label co-owned by Bryce and Aaron Dessner — Babbs also did his own headline dates in London and Paris. After his sophomore album, Critics Pass Away, which was praised by Uncut, Time Out New York, and many others, Baby Dayliner seemed to disappear.

The truth is: he never really left. In 2008, Gawker blog Jezebel named him one of the world's Sexiest Everyday Men, alongside President Barack Obama and his bodyguard, and journalists Nate Silver and Ezra Klein. In subsequent years an early leaked demo of "You Push, I'll Go" was named Song of the Day on KEXP, where it became an all-time favorite of morning host, John Richards. For the lion's share of the past decade, though, Babbs left the performing scene behind for a steady rhythm of work as a DJ throughout NYC's clubs, bars, and backrooms, where he puts his unique spin on the Top 40 hits. He did, however, tour in 2014 — performing a dozen American tour dates with The Uncluded (a collaboration between Aesop Rock and Kimye Dawson) occasionally joined by The Pizza Underground (Macaulay Culkin's Velvet Underground parody band).

In 2015, KEXP's John Richards — following years of airplay for "You Push, I'll Go" — enthusiastically invited Baby Dayliner to join the line-up of a benefit concert for the Seattle station. "I've been waiting to for years to see that live," Richards said after the performance of "You Push, I'll Go." In 2016, the subscription vinyl club Turntable Kitchen put the track on 7" wax for its first ever physical release — reinforcing its status as an underground cult classic.

Now Baby Dayliner returns! "You Push I'll Go" is finally widely available as part of a new EP — his first commercial release in over a decade. Recorded in upstate New York during a brief time away from his longtime home in Manhattan, the new collection is the first product of that period of sequestration. It reveals a series of songs — some new, some reworked from sets between his last release and today. While the music borrows elements from synth-pop, dance music, and hip-hop, it never confuses them. The sound has the sweetness and catchiness of indie pop, and elements of R&B 'real talk' and yet it sits uncomfortably between those genres, making it a fusion of worlds that other artists can't help but notice.

It's been accompanied by glowing praise from composer Nico Muhly, hip-hop MC Aesop Rock, and The National's singer Matt Berninger,— proving Baby Dayliner is an artist's artist, whose impact cuts across genre. Says Berninger: "What I like most Baby Dayliner’s writing is that there's rarely any meanness in his songs; no forced posturing or aggressiveness; and they are loaded with empathy. He sings about flawed and vane characters but with genuine understanding and kindness. The music is catchy, smart, and weird— something beautiful and odd, that only he does. Baby Dayliner is something uncommon in pop music. He’s unique."

Which finally, is what we aim for...

PRESS HYPE
"a retro romo romp through a New York ghost world that is neither the drainpipe-and-denim sweat pile of CBGBs nor the mirrorball glitz of Studio 54 but somewhere in between.” — Uncut Magazine

"Baby Dayliner prerecords lo-fi synth-ditties at home, carries his gear on stage in an old suitcase, and then sings along like a one-man karaoke act. There's more than novelty going on: With his low-throated voice, earnest love songs, and silly-yet-somehow-genuine rapping, Baby Dayliner is crafting beguiling songs that test the limits of sincerity. An offbeat, endearing surprise." — Village Voice

"Mix a couple of degrees of Kevin Bacon with some actual musical talent and you get yourself some Baby Dayliner." — Jezebel (Baby Dayliner named one of the 2008 Sexiest Everyday Men)


THE MOVEMENT (inspired by The Tris McCall Report www.trismccall.net)
Baby Dayliner is a performer
The crowds at his shows are filled with a variety of night dwellers: curiosity-seekers and punk rockers, the creative and the created, musicians and artists, pop fetishists and thugs. They've watched the previous few acts with their arms crossed in the familiar stand-offish way, but now bodies are in motion. It's involuntary, they're swept away--these are the very last people you'd ever see cutting loose at a show, but here they are not afraid to show they love it. Supremely in tune with his audience, head back, singing with passion, fury, and ruthless intelligence, cross-stepping, smiling wide, and squeezing every drop of meaning out of each syllable. All arms in the air now! Shouts and whistles. The crowd is dancing in a frenzy of recognition and pure excitement, and Baby Dayliner is whipping them to do more. He turns, he shakes, he croons and shouts over thunderous beats and bass. One man, one machine in supreme synchronicity. And now everyone is in thrall to the delirium of the moment. Is this the encore? Nah, friend, the show's just started, and it's the closest thing the jaded New York scene will ever have to a homegrown Beatle-mania. Baby Dayliner has arrived.

Baby Dayliner is a writer
His songs are supremely literate--drawing from a formidable lexicon and an enormous repository of storytelling strategies. His intelligence is never on display for its own sake; instead, it's a tool for communicating sophisticated narratives. Some of the songs are missives, many are descriptive, and almost all contain indelible, inspiring and unforgettable language. He juxtaposes rap hyperbole and the sarcasm of the noveau bohemians with the language common to the New York nightlife--all of it sung to the delight and identification of the local crowd.

Baby Dayliner is a producer
He understands his machines and knows how to coax out of them maximum excitement. He's a pop song fabricator of discarded parts and pieces, which make his songs continually surprising in their melodicism and composition. There are elements of mid-80s synthpop, European post-punk, 70s disco, top 40 radio, and underground rap. There are hypnotic synth pulses, rafter-rattling choruses, new romantic moods and often a unique, polished style of hip-hop and dance production that could easily earn him rotation on commercial radio.

Baby Dayliner is a revelation
He plays maximum rock'n'roll hangouts in front of punk crowds, hip-hop crowds, folk crowds, hardcore crowds. He regularly follows bands with formidable wattage (Scissor Sisters, The National, Trans Am). Yet when he opens his mysterious suitcase, turns on his gear, and walks to center stage, he inevitably proceeds to move the crowd, open eyes, and blow minds. He broadcasts tropes and language from rap and disco in settings where neither rap nor disco are typically heard, but he sells it every time, without condescending to either form. He is bravely building bridges, doing profound theoretical work, all the while getting busy and never forgetting to entertain. Fundamentally he is a communicator, one who makes sure you hear every syllable he sings-and his ever-growing audience hangs on every syllable. Baby Dayliner is by no means the only one-person act to come on the music scene of late, but he is by far the most intelligent, the most multi-faceted, the most syncretic and single-minded. By relentlessly challenging his audience, by taking the lead and daring the crowd to follow, he makes a profound impact on every room he plays. But now I've said too much. This act is brilliant, and it encapsulates all the best New York City music has to offer...

Come see for yourself.