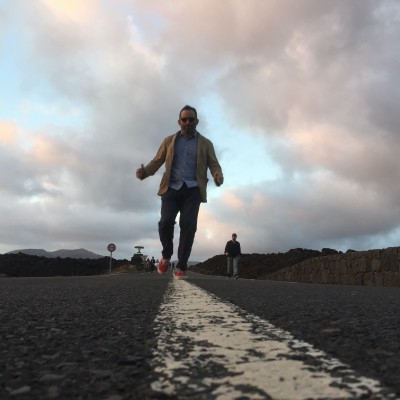 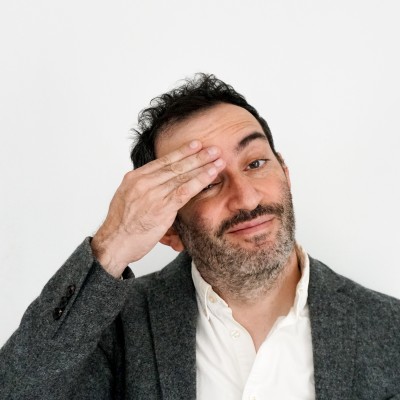 Las Palabras is a fitting name for the latest project of multi-instrumentalist & songwriter Rafael Cohen – nine joyful snapshots about simple pleasures, sung entirely in his first language, Spanish. A child of Guatemalan Jews, Cohen lived in Mexico City until he was ten, when his family moved to Washington, D.C., and he got involved in the city’s hardcore and punk scenes. Over the years, his bands toured intensively and released records on classic independent labels like Dischord and Touch and Go, with Cohen eventually settling into his current role as songwriter and touring bassist with !!! (aka Chk Chk Chk), a group whose popularity as a global touring act recalls his naturally post-nationalistic outlook.

Taking its name from the Spanish phrase for “The Words,” the project arose out of Cohen’s desire to write songs in his native language, despite having only a fourth-grade level of proficiency – perfectly effective for talking to family, but a hurdle in taking on more adult topics. This creative limitation proves itself to an asset on Las Palabras debut, allowing Cohen to write simply and whimsically, in a way he’d feel too self-conscious to write in English. The charm and effectiveness of these songs lie in their ease and unfussiness -- tunes about afternoon cups of coffee (“Mi Café”) and basketball phenom John Wall (“Juan Pared”), a trip back to Mexico City ("Condesa") and a long line of messy bedrooms ("Cuartos").

Musically, Las Palabras evokes the records Cohen’s parents listened to while he was growing up: classic Caetano Veloso and Jorge Ben in their post-Tropicalia years, Mexican guitar standards, and the acoustic soul of Bill Withers. Filled out with lush basslines, resonant vocals, and intertwining guitars and keyboards, the songs are filled with texture and idiosyncrasy. A Philip Glass-like synth line (“Tarde”) feel just as organic as sonorous biblical recitations emanating from a psychedelic soundscapse (“Noche Buena”). While Cohen plays most of the instruments on the album, a handful of collaborators, including Harris Klahr (Q and not U, President), Gabriel Andruzzi (The Rapture), Molly Schnick (Outhud, Jean on Jean), and Nic Offer (!!!), provide backing on several tracks

Though the music is more stripped down and DIY than its Brazilian and soul influences, the overall feel is an evocative combination of reminisce and anachronism. In a way, Las Palabras could be taken as a Spanish-language version of the timeless yet contemporary songwriting of Will Oldham, Bill Callahan or Elliott Smith. Imagine if the golden age of South American signer-songwriters emerged in the era of the four-track…

ARTIST STATEMENT FROM LAS PALABRAS aka RAFAEL COHEN
I was born in Mexico City. My parents are both Guatemalan Jews. Spanish is my first language and my first guitar was a nylon string Spanish guitar that belonged to my dad. After moving to Washington, DC when I was 9 I got into the local punk rock scene in middle school. I stopped listening to much of the Spanish language music I grew up listening to... Guatemalan marimbas, Peruvian waltzes, Brazilian bossa nova, salsa, and started listening exclusively to american rock and jazz.

I got more into jazz and went to Wesleyan University where I studied with Anthony Braxton. At the same time I kept playing in bands and after college moved back to DC with my band El Guapo who eventually signed with Dischord Records. On our last tour in 2006 I bought a small nylon stringed acoustic guitar to play in the van and started to write songs on it that touched on the music I had grown up listening to and also touched on a newfound love of Brazilian music from the '70s.

El Guapo broke up and I was left with all these song fragments. For the first time in my life I decided to try to sing in Spanish. Since I left Mexico when I was 9 my vocabulary in Spanish was less extensive and the songs were very simple. I kept at it as you do when you stumble across making a style of music that you've never made before but admired. I ended up recording this record over a couple of years and stuck to basic themes: coffee, basketball, messy rooms.

It was exciting to me to recreate some of the sonics of music I admired (from Caetano Veloso to Bill Withers) but it also meant a lot to me to sing in my native language and reconcile my earliest musical memories with the musician I became in the United States. It's my way of reconciling my origins and my identity as an immigrant through my musical practice which is so built around the person I became when I moved to the United States. In many ways the music feels like most personal I've ever made even if the lyrics have rarely reflected very deeply into my personal life. Also- oddly, I think my voice sounds better singing in Spanish. Maybe there's something to a "native tongue" after all.