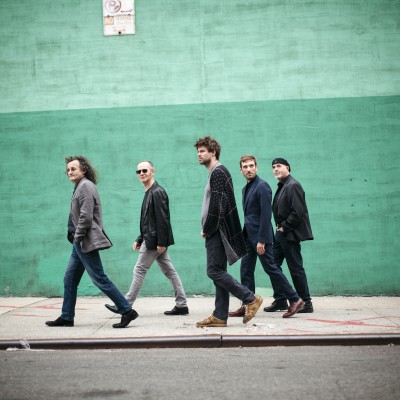 "Their live performances so far have been revelatory... Future dates are likely to cement them as one of the great forces in Irish music." — The Irish Times

"[The Gloaming] moves the music of Ireland in captivating new directions." — The New Yorker

"The Gloaming is a wonderful mix of soulful and passionate talents who have created their own genre." — Peter Gabriel

THE BAND
Martin Hayes (fiddle, violin) : He sits center, a master fiddler from County Clare, and one of the most renown contemporary practitioners of Irish music.

Iarla O'Lionaird (vocals) : Raised in County Cork, Iarla is the most renown living vocalist working in the Irish music tradition, having appeared on late night shows like Jools Holland and David Letterman, and on soundtracks to acclaimed films like Hotel Rawanda and Scorsese's Gangs of New York. Though trained in the sean-n?s tradition, he's made a career working in contexts far afield. His ethereal voice is best known from his '90s work on Real World, both solo and with the multi-platinum selling electronic group Afro-Celt Sound System. His most recent recording was "Gr? agus B?s" on classical composer Donnacha Dennehy's debut for Nonesuch. He lives in County Kilkenny.

Thomas Bartlett (piano, producer) : At the furthest remove from the folk tradition, he is a producer and sideman from New York City.

Dennis Cahill (guitar) : An American based in Chicago, he contributes minimal, percussive playing that lifts and amplifies specific elements of the music in a way that has been compared to musical acupuncture.

Caoimhin O'Raghallaigh (hardanger fiddle): Born and based in Dublin, and the youngest member of the group, Caoimhin (pronounced kwa-veen) contributes much to the uncommon atmosphere of the Gloaming's music, filling it with drones and abstract textures.

THE SOUND
The Gloaming is a collaboration between five musicians named Martin Hayes (violin, fiddle), Thomas Bartlett aka Doveman (piano), Iarla O'Lionaird (vocals), Dennis Cahill (guitar) and Caoimhin O'Raghallaigh (hardanger fiddle). More on their individual biographies later. For now, it's enough to say that they range in age from 30something to 50something, that they live in America and Ireland, and that each one has won individual renowned as a master musician.

"I remember the first time I heard Martin Hayes play fiddle," says Thomas Bartlett of the quintet's de facto leader. "There was something that happened to my body that I hadn't experienced before. I felt like my heart would expand and contract with the way he was playing those strings."

In early 2011, the five musicians first met to explore their collaboration at Grouse Lodge Studios in Ireland's County Westmeath, an hour northwest of Dublin. In August 2011 -- newly christened The Gloaming -- they went on their first Irish tour, including a sold out debut show at The National Concert Hall, Dublin. The sellout hints at the excitement surrounding their formation, as does the fact that Ireland's prime minister Edna Kenny was in attendance that night.
But now, a bit about the music itself.

Most of The Gloaming's work is based on traditional Irish forms, the basic grammar of which is known as a "reel." "Reels" are performed in simple rhythmic meters (2/2 or 4/4) and repeated in simple configurations. They are the syntax of Irish music just as a "riddim" is to dub reggae and the "break" is to contemporary hip-hop.

The rhythms and melodies may strike you as eerily familiar. Originating among the Scots and the Irish, "reels" crossed the Atlantic Ocean during successive waves of British and Irish immigration beginning in colonial times. The sound spread like fire in North America, entering the tradition of the Acadians and Quebecers of Francophone Canada and passing through the USA's New England states. That's where a teenage Bartlett first encountered the music, in his home state of Vermont. While still in junior high, long before he gained notice for his work with a who's who of art- and indie-rock performers (Antony, The National, Nico Muhly) Bartlett had a first band with Sam Amidon which gained popularity touring across the eastern seaboard, playing traditional Irish folk to a fervent subculture obsessed with traditional contra dancing. (It wouldn't be far off to describe it as a hokey, slightly more adult analog to the 90s ska trend--one that spread among NPR-listeners before NPR was "cool.") Bartlett interest was rekindled as he embarked on his close collaborative relationship with the Irish singer-songwriter Glen Hansard (Swell Season, The Frames, Once film & musical). Frequent trips to Dublin brought him full circle to the music that began his career as a "professional."

Happily, what The Gloaming do with the syntax of Irish music is anything but simple nostalgia. Into these traditional structures, they introduce deep wells of personality and experience. Lyrics are drawn from the history of Irish literature, old and new. The music is played with the authority of virtuosos. The result is unclouded by sheen or hokey sentimentality. Instead, it's haunting and emotionally charged. It sounds ancient without being a mere reproduction.

So, The Gloaming begins with music for dancing. With the addition of their virtuosity and a modernist impulse, the music serves as an on-ramp to a new world of sound. What is the group hoping to accomplish? Well, much has been made lately of 90s nostalgia, but please recall grungy rock music wasn't the only trend that informed the decade. The 90s also witnessed a strangely popular influx of instrumental sounds. Perhaps the Gloaming hope to do for Irish music what Buena Vista Social Club did for Afro-Cuban music or, farther afield, what groups like Tortoise did to help a new generation access the then-obscure music of minimalist composer Steve Reich and Krautrock pioneers like Neu and Can. It's not quite Daft Punk playing at my house and the blogs probably won't like it but it is a sincere attempt to make something beautiful and lasting and true for listeners of any age.

Their debut album, entitled simply 'The Gloaming', was produced by Thomas Bartlett and mixed by Patrick Dillett (David Byrne & St. Vincent). It was finished in the summer of 2013 during the build up to a series of sold out concerts at prestigious venues in London, Amsterdam, Paris & New York.

Please, no jokes about leprechauns at the end of rainbows. This is a beginning.

SOME DEFINITIONS
reel -- A form of folk dance native to Scotland and Ireland. Also the name of the music that accompanies it.

sean-n?s -- Literally translated from Gaelic as "old style," it refers both to a form of solo dancing, and a form of unaccompanied solo singing. Melodies in this tradition are long, extremely stylized, melodically complex and include substantial ornament and rhythmic variant from verse to verse. The lyrics are usually about love, devotion or lamentation.

hardanger -- A traditional string instrument which takes its name from a region in western Norway. Similar to a violin but with up to a half-dozen extra strings -- called "understrings" or "sympathetic strings" -- which resonate under the influence of the primary four. Often these instruments are highly decorated with animal carvings or inlaid precious materials such as mother of pearl.