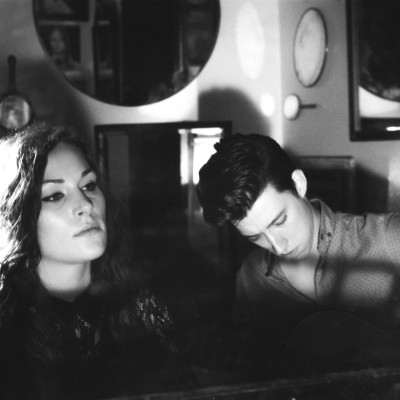 
The Perennials are the young married couple of Pete & Amanda Wells. Like most bands from Brooklyn, they met at a bible school in the Italian countryside. But more on that in a moment.

Pete Wells was born in 1991 in Bay Ridge, Brooklyn - not the hippest part of the borough, now or then. His dad was a Navy Seal turned plumber, his mother a nurse turned housewife. He is the third of six kids. At age 5, Pete's family moved to Florida so his father could go to seminary.

In their new town, the kids were homeschooled, including all the home school cliches: TV time was doled out in 30 minute daily increments. Pete's musical education consisted of learning the recorder, singing in church and Christian radio. Eventually top 40 country was permitted, having been deemed "morally acceptable." Via that seemingly harmless loosening of regulations, greatest hits cassettes by Johnny Cash, Simon & Garfunkel and Bob Dylan made their way into the house, serving as a gateway drug to Real Music.

Amanda was born in 1990 in Spokane, Washington. Following a drive-by shooting in her hometown, her parents decided they'd had enough of the big city. Living on unspoiled lands an hour north, Amanda grew up in a constantly-under-construction cabin deep in an evergreen forest.

Both of them are also children of the 90s - growing up at time when Dylan & Simon & Cash were canonical, part of ancient history - but both of them also have a sensibility shot through with an eerie sense of tradition & traditionalism for "people their age." Pete and Amanda were 19 & 20 (respectively) when they married and are - as of this writing - still working through the confusions of being twentysomething.


How they met is like something out of a modern day Fellini film, or a career rebooting Woody Allen production.

As teenagers, both Pete and Amanda ended up in San Lorenzo di Arzine: population 300 - most of that population either 90-year olds or vineyards. Pete's family had moved to a small city in the northeastern corner of Italy, where his parents worked on planting seeds for their evangelical church & making converts. San Lorenzo di Arzine was an hour's drive south.

Pete traveled there to attend bible school in an old farm house. Through a family connection, Amanda ended up at the school over two spring sessions, volunteering in the kitchen, more drawn by a sense of adventure than a commitment to faith.

The school functioned like a contemporary monastery. Residents were segregated by gender into two dorm buildings, separated by a courtyard with a common classroom and dining hall.

Pete had picked up guitar while, en route to Italy, his family made a one year stopover in the NYC burrough of Staten Island, where he was mostly teenaged and bored. Amanda hadn't grown up playing music. So, there in Italy - between class schedules, cleaning duties & prayer times - The Perennials began.