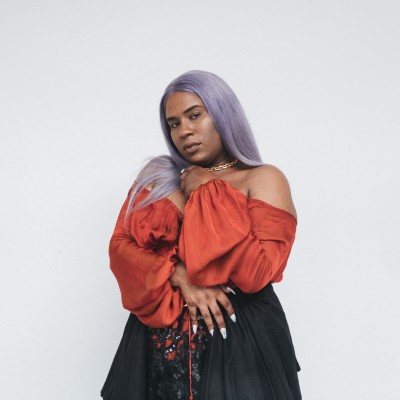 If one scours the chasms between the reverence for ‘90s revivalist hiphop and the silvery futurists of the genre, there they may find a bridge: Rahrah Gabor. The moniker of Mariella Jimenez, Rahrah has cherry-topped NY and New Jersey nightlife on the strength of her critical presence, pointed lyricism, hood savvy, unique sense of style and incorrigible self-possession that bucks at any and all nay-sayers. In her own words, she’s “hip hop's Omar Little. Only prettier.”

Raised living between Asbury Park and Newark, it was in high school, with questions about her identity still looming, that she found her passion for rap which - in hindsight - aligned perfectly with her passion for English. Rahrah would eventually be a school teacher. Despite spending years dedicating herself to a flailing public school system, as she visibly became more of herself to the world her employment as a beloved educator would be compromised. She was fired. Odd jobs would make ends meet and creativity would provide when odd jobs didn’t.

Meanwhile, and after self-releasing two EPs, Rahrah went on to catch the eyes and ears of outlets like Afropunk, photographers Ryan McGinley and Justin French, and artists like Buke and Gase whom she’s supported at Mercury Lounge. Gabor played Slay TV’s inaugural SlayFest at Brooklyn Academy of Music and the DICE Festival in Berlin, Germany.

If you ask her, she’ll admit to having first dove into hip-hop to prove a point about who is allowed to monopolize a genre where neither the boys club nor the burgeoning girl bosses of the field yield space to the iconoclasts. But now, instead, Rahrah braces herself to become the kind of challenge an increasingly challenged industry will be unable to ignore.