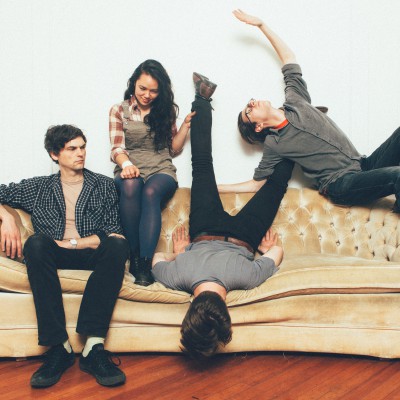 February 8, 2015 - Steven Reker of People Get Ready wins award, debuts at Lincoln Center
Things may have seemed quiet on the People Get Ready front since the summer release of their sophomo...

October 23, 2013 - People Get Ready tour, work on LP #2 with Deerhoof's Greg Saunier
While you may be staring into the last dregs of 2013 and trying to distract yourself from impending...

February 8, 2015 - Steven Reker of People Get Ready wins award, debuts at Lincoln Center
Things may have seemed quiet on the People Get Ready front since the summer release of their sophomo...

October 23, 2013 - People Get Ready tour, work on LP #2 with Deerhoof's Greg Saunier
While you may be staring into the last dregs of 2013 and trying to distract yourself from impending...

The Brooklyn-based People Get Ready is Steven Reker, Luke Fasano (ex-Yeasayer), James Rickman (ex-Lizzie Trulie, ex-Slow Gherkin), and Jen Goma (A Sunny Day in Glasgow). In 2006 Reker moved from Arizona to New York City, finding work as a dancer and guitarist on David Byrne's 2008-09 tour, as a composer in Yasuko Yokoshi's recent dance work, and as a choreographer for Miranda July's film The Future.

2009 marked the debut of People Get Ready in a performance at The Kitchen's Dance and Process series designed to pay homage to both sides of Reker's creativity. The band's distinct brand of vivid electronic pop bursts with energy, propelled by swirling and swelling harmonies, hard-to-shake melodies and high-energy rhythms set to a vocal ebb and flow led by Reker but harmonized and intensified by the entire band.

Their self-titled debut album was recorded by emerging composer/performer/producer Jherek Bischoff in the summer of 2011 at Denniston Hill, a 100+ year old farm house in upstate New York. The farm house was transformed into an artists' retreat by a group of friends from the East Village who forged their bonds during the 1990s -- and the space was re-transformed by Bischoff who trucked two suitcases of gear to this remote location, recording them across three rooms of the house, including a ceramic-tiled bathroom with some lovely natural acoustic properties.

If there's one quality that makes People Get Ready distinct it's their unique ability to re-define what a band is, to blur boundaries, and to forge continuing creative bonds with the formidable list of artists whose paths they've crossed. i.e. One of Denniston Hill's founders, the painter Julie Mehretu, has provided cover art for their album; the band's music has found coveted slots on playlists curated by Byrne and July; and they've shared stages with the likes of Dale Earnhardt Jr Jr, TV on the Radio's Tunde Adebimpe, !!! and the who's who of Brooklyn artists selected for Aaron & Bryce Dessner's scene-defining Crossing Brooklyn Ferry festival at BAM.

NPR Music: Bob Boilen says, "On Friday, my last day at CMJ, I hit the jackpot and walked away with something I'll remember for years to come. The band was People Get Ready, but honestly this was more than a band -- this was the best mix of performance art and music I've seen in decades. Watching this show, called Specific Ocean, felt like seeing a a group create a live music video for each song. The buoyant, celebratory work took place at a large, black box theater space at New York Live Arts, and was full of the kind of surprises I want out of music and theater... People Get Ready's album comes out this week. I've been playing it constantly since Friday's performance."

David Byrne's email newsletter: "A few years ago, I toured with some wonderful musicians and dancers. Among them was Steven Reker, whose group, People Get Ready, just released their debut, full-length digital record... Good group, good songs, but there's more... They integrate dance, movement, performance, music and singing in a way I haven't seen before, and it's very promising. It is something I've been trying to do in recent years as well, and People Get Ready are taking it to places I haven't seen before... Highly recommended."

NEW YORK TIMES: "Song-and-Dance Man Shows His Two Sides," a review of People Get Ready's debut at The Kitchen.

NEW YORK TIMES: "A Brooklyn Constellation: A sampling of the connections among Aaron and Bryce Dessner, curators of the Crossing Brooklyn Ferry festival, and some of the artists performing"