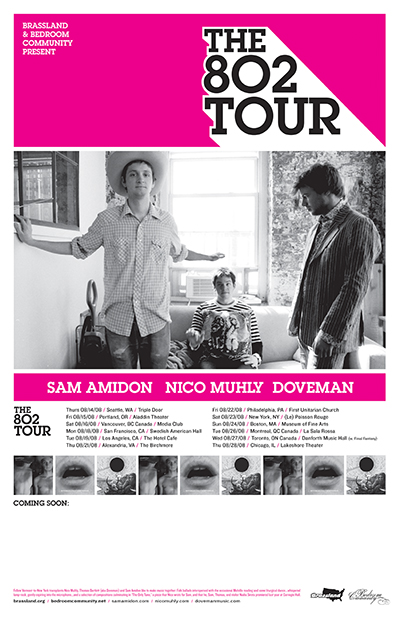 The 802 tour celebrated the friendship between artists Nico Muhly, Thomas "Doveman" Bartlett and Sam Amidon. Coming just before the popularization of the (admittedly ridiculous) genre names 'alt-classical' and 'indie classical,' it was the tour that codified the phenomenon of hip young Brooklynites performing sophisticated multi-genre music in a rock club setting. (Oddly enough, however, both Thomas & Nico live—and continue to live—in Manhattan.)

A snapshot of that moment: The second Doveman album With My Left Hand I Raise the Dead came out in autumn 2007, though it was outshone in the media's eyes by the viral phenomenon that was summer 2008's Footloose cover album. Amidon enjoyed his first burst of success with his Bedroom Community debut All Is Well—and Brassland had licensed Nico Muhly's second album Mothertongue from that same label for the North American market. At the time, it was one of the most acclaimed albums in our catalog, released soon after a profile of Nico in The New Yorker solidified his position as one of the most famous American composers of his generation.

This tour was conceived as part joke, part artistic coming-together, part paid vacation. The joke was mostly contained in the name of the tour. All three musicians had roots in Vermont—hence 802, the sole area code one of America's more rural states. Artistically speaking, we found the notion of their music presented on one-stage as yet-another example of meaningful community-ties taking precedence arbitrary genre-boundaries. The paid-vacation part is attributable mostly to Nico, who was growing so busy at that time, this tour was his guaranteed way of getting to spend some time with some of his closest friends.

Milestones achieved on this tour included one of the first-ever performances at the newly minted (Le) Poisson Rouge. The collaboration was reconvened for a presentation at Columbia University's Miller Theater in 2009 and a pair of shows at Minneapolis's Walker Art Center in 2012.

You can read some of the original news stories about the 802 Tour—and some tour diary entries from Nico & Sam elsewhere on brassland.org.

VIDEO: The first New York presentation of the 802 Tour at (Le) Poisson Rouge in the West Village, one of the first concerts at the newly opened venue.

Fellow Vermont-to-New York transplants Nico Muhly, Thomas Bartlett (aka Doveman), and Sam Amidon like to make music together: They have appeared in each other's shows, played on each other's records, and now they're going to grab a friend (such as Oren Bloedow) or two (such as Oren Bloedow and Nadia Sirota), pile into a van, and head off on tour. The performances feature music from each of the three of them, as well as some sneak previews of future collaborative schemes. Sam will perform a set of folk ballads interspersed with the occasional Melville reading and some liturgical dance, accompanied by Thomas with guest plinks by Nico. The microphone will then be passed to Thomas, who will whisper some lamp-rock, gently expiring into the microphone, while Sam, Nico, and Oren strum and plink and tap and generally try to liven things up. Finally, Nico will perform a selection of his compositions, with help from Sam, Thomas, Oren, and favored drinking buddy and violist extraordinaire Nadia, culminating in "The Only Tune," a piece that Nico wrote for Sam, and that he, Sam, Thomas, and Nadia premiered last year at Carnegie Hall.