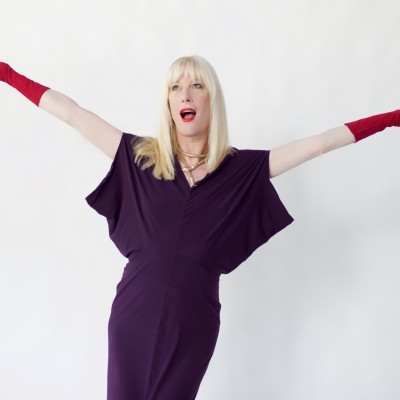 Mx. Justin Vivian Bond is a trans-genre artist living in New York City: singer-songwriter, author & memoirist, performance artist, occasional actor, and Radical Faerie - an individual Hilton Als has called "the best cabaret artist of [v's] generation" in The New Yorker. But a word about honorifics: Bond is transgender and prefers the gender-inclusive Mx (in place of Ms/Mr) and the pronoun v (i.e. vself instead of her/himself). The latter is a reference to v's middle name but the term Mx may be more familiar: it recently gained inclusion into the Oxford English Dictionary.

Which is to say, long before Transparent or Caitlyn Jenner drew clicks and headlines, Mx. Justin Vivian Bond has been a bellwether for an under-recognized community and a well-established legend in downtown NYC. In the Kiki and Herb duo project with musician Kenny Mellman, Mx. Bond played Kiki, a boozy, geriatric lounge singer who was equal parts hilarious, truth-telling, artful and profane. V won an Obie (2001), a Bessie (2004), and a Tony nomination (2007) for the role, while the project had multiple runs on Broadway and at Carnegie Hall before going on hiatus in 2008. (Mellman's next collaborator was Bikini Kill's Kathleen Hanna, which gives a sense of Mx. Bond's iconoclasm & the company v keeps.)