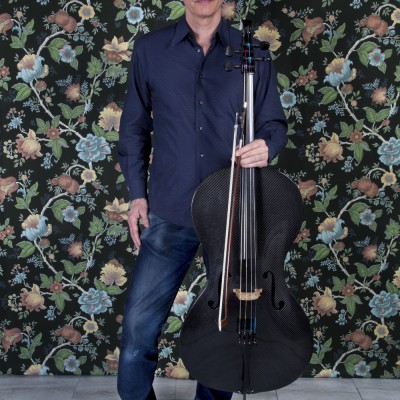 October 18, 2006 - Erik Friedlander Plays on Mountain Goats Album
In 2005, our man Friedlander made his true indie rockin&#39; debut by contributing cello and variou...

October 18, 2006 - Erik Friedlander Plays on Mountain Goats Album
In 2005, our man Friedlander made his true indie rockin&#39; debut by contributing cello and variou...

Erik Friedlander is a unique cellist whose work blurs genre borders. Is he a composer or improviser? Is this classical music or jazz? The LA Times put it best when they wrote, "Friedlander's performance clearly positions him as the first potential star performer on his instrument."

Erik's dad was the noted art photographer Lee Friedlander, known best by musicians and jazz aficionados for the cover photos he took for Atlantic Records in the 60s. His passion for r&b and jazz greatly influenced Erik, whose earliest memories are of a household filled with the sounds of his father's subjects--Ray Charles, Aretha Franklin, McCoy Tyner, Ornette Coleman, and John Coltrane. Erik's been playing the cello since age 8, and we assure you that if you have a concept of what that instrument can do, he will reshape it.

Erik came into his own in the 1990s as he became an integral part of NYC's downtown jazz scene. He played with instrumental artists like saxophonist John Zorn, tenor player Joe Lovano, and trumpeter Dave Douglas; did sideman work with pop artists like Laurie Anderson, Alanis Morissette and Courtney Love; toured and recorded with two of his own groups, Chimera and the still-extant Topaz; and played on records released on labels like Tzadik, Nonesuch, ECM and Avant, receiving notices in publications like Boston Globe, The Wire, and Billboard which wrote, "Friedlander [is] one of today's most ingenious and forward- thinking musical practitioners."

All About Jazz: With a father who was responsible for many classic jazz album cover images that have been ingrained into the collective jazz consciousness-cellist, composer, and leader Erik Friedlander had a good head start, to say the least, growing up into the world of jazz and improvisational music. Father Lee Friedlander is credited with the memorable photographic images of such great 50's and 60's jazz album covers as Mose Allison's I Don't Worry About A Thing (1962), Roy Ayers' Stoned Soul Picnic (1968), Ray Charles' At Newport (1958), Ornette Coleman's This Is Our Music (1960), John Coltrane's Coltrane Jazz (1960), Jimmy Giuffre's The Jimmy Giuffre Clarinet (1956), Joe Zawinul's Rise & Fall of the Third Stream (1965), and Charles Mingus' Blues & Roots (1959), amongst many, many others.

Though he chose to pursue a career in the music industry, it was not like Erik Friedlander had to pre-occupy himself with filling the large shoes of his father. He was able to avert the unfortunate and inevitable comparisons of the heritage dilemma that other musicians have inherited and had to endure, such as Ravi Coltrane and T.S. Monk Jr. in the jazz world and people like Jacob Dylan (of The Wallflowers) in the rock world. Such musicians have to concern themselves with warding off such media frenzies and public expectations, if not ignore them altogether, after entering the music world as professional musicians themselves. Friedlander certainly cut that one off at the pass with no comparisons to be made between a legendary jazz music photographer, and himself, a cellist who has become one of the most important musicians on his respective instrument within jazz, New Music, and the ever vital Downtown scene of New York...