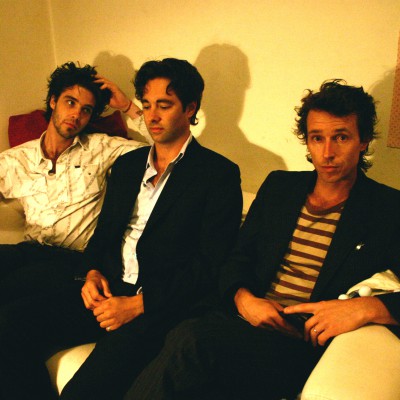 July 17, 2006 - Devastations: US Debut in October
Earlier this year, Brassland announced imminent plans to release the debut album by Australia's...

July 17, 2006 - Devastations: US Debut in October
Earlier this year, Brassland announced imminent plans to release the debut album by Australia's...

Devastations are from Melbourne, Australia. They are the first band signed to Brassland on the strength of an unsolicited demo, and it won't take long listening to their sophomore album Coal to figure out why we were so enthusiastic about presenting them to you, the listener.

Formed in late 2002, Devastations consciously chose to ignore the strut and bluster that dominated the musical landscape at the time, instead mining a deep well of their own, full of understated emotion, veiled menace, and a distinct flair for creating a romantic mood. It was this music's unique intimacy, its ability to forge a human connection, which caused all those peers to sing their praises. Their self-titled debut brought them invitations to open for artists like Dirty Three, Cat Power, and the Tindersticks -- the latter of whom they've supported extensively in both Australia and Europe.

After an excellent initial reception in Australia, Devastations choose to follow in the footsteps of spiritual ancestors like the Go-Betweens and Birthday Party, and make their way in the larger world. They moved to Berlin in 2003, and played their first European show in September as part of 'Bada Bing', a concert series organized by Einsturzende Neubauten's Alexander Hacke. Devastations toured extensively in their new home, and recorded backing tracks for infamous Berlin duo Cobra Killer's third album '76/77.' More recently, vocalist/bassist Conrad Standish contributed three songs and guested on the Liars new album. (Standish is childhood friends with that band's leader, Angus Andrew.)

Devastations finally came to the attention of Brassland in late 2004 when they crossed paths with labelmates, Clogs, first sharing a stage during a festival in Belgium, then meeting again a few days later in Paris. The Brassland braintrust had already expressed their admiration for Devastations music, and encouraged them to meet Padma Newsome, a fellow Australian who plays violin/viola in both Clogs and The National. Wine was drunk, plans were discussed, plots were hatched, and the group decided to join the extended Brassland family.

What will Devastations do for you?

When Rowland S. Howard heard them he did not wonder about influences. Rather he wrote a rapturous newspaper article about the group and asked them collaborate with him on a single. When Karen O of the Yeah Yeah Yeahs heard them, she so fell in love with their music telling MOJO they were "the best thing I've heard all year."

We hope you agree.

Karen O, singer, Yeah Yeah Yeahs from MOJO Magazine: I heard this for the first time in Australia. Within five minutes I had tears streaming down my face. It gives me feelings I can tap into outside of myself when I can't quite tap into what is going on inside. That for me is most precious.

Rowland S. Howard, guitarist, The Birthday Party: Devastations are; the sound of a meteor cooling in the cut grass; the clash of a terrible beauty with the customary; Tom Carlyon, Hugo Cran and Conrad Standish. The Devastations are all about silence. Holes; big enough and empty enough to fill the grand canyon. Silence and how you fill it. And how much you fill it, and what you fill it with, and when? And the answer to that last part of the puzzle is song. And song is where Devastations come in. They neither sound like the past or this fad. This is timeless, because it is of the heart, and the soul is always timeless.