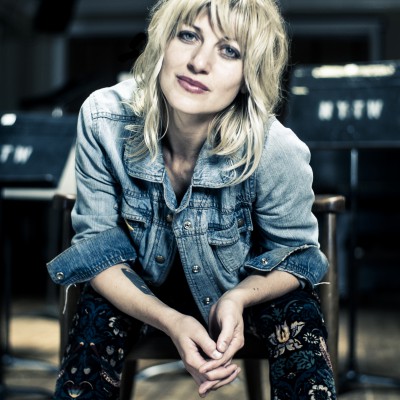 June 14, 2019 - Did you ever think we'd release music by a Tony winner?
Earlier today we released "Woyaya" — a collaboration between Anaïs Mitchell and Kate Stables of Th...

June 14, 2019 - Did you ever think we'd release music by a Tony winner?
Earlier today we released "Woyaya" — a collaboration between Anaïs Mitchell and Kate Stables of Th...

Anaïs Mitchell is a Vermont and Brooklyn-based singer-songwriter who comes from the world of narrative folksong, poetry and balladry. She recorded for Ani Difranco's Righteous Babe Records for several years before starting her own Wilderland label in 2012. Among her recorded works are six full-length albums, including 2010's Hadestown, a folk opera based on the Orpheus myth; 2012's Young Man in America, which was described by the UK's Independent as 'an epic tale of American becoming’; and 2013’s Child Ballads, a collaboration with Jefferson Hamer, which won a BBC Radio Two Folk Award for Best Traditional Track.

Mitchell has headlined shows worldwide as well as supporting tours for Bon Iver, Ani Difranco, The Low Anthem (all of whom appear as guest singers on Hadestown), Josh Ritter and Punch Brothers. Her stage production of Hadestown, which was ten years in the making, opened Off-Broadway in May 2016 to rave reviews. The New York Times called it “inventive, beguiling and spellbinding” while Vogue announced that “Hadestown will be your new theater obsession.” The show was extended twice as a result of critical success and sell-out performances. If there’s a common thread in Mitchell’s work – from her earliest acoustic records to the Hadestown show – it’s that she’s as interested in the world around her as the one inside her. She has a way of tackling big themes with the same emotional intimacy most artists use to describe their inner lives. That’s perhaps why the New York Times noted that her songs “address contemporary angst with uncanny vision…. a formidable songwriting talent.”